On Thursday 28th and Friday 29th July, a Berlin-based audiovisual performance collective StratoFyzika performed the outcome of the artist residency at Lake Studios Berlin sponsored by TroikaTronix/Mark Coniglio. Since I follow StratoFyzika’s work from the very beginning, I’m glad to share some insight from Friday night and their latest piece called Φ.

It’s been 4 years since the founders of StratoFyzika – Alessandra Leone alias Aikia, Lenka Kočišová aka Akkamiau and Hen Lovely Bird met in Berlin for the first collaboration. Since then, they have created several audiovisual performance pieces that have been presented around the world, worked with experts from various fields including weareble sensors and sound design and attended few residencies, including the last one at Lake Studios. This time, the trio of founders collaborated with a Lisbon-based choreographer Daria Kaufman and creative coder Thomas Van Ta and instead of their typically abstract projection, they focused on light and its absence and the use of sensors. At the performance on Friday, the sensors were not included yet, however, the next step is to use data from sensors systems by x-io technologies “for calculations which will manipulate the sounds in space and the change of phasing the patterns of lightning,” as Akkamiau explained it.

StratoFyzika’s performances are always based on concepts of (meta)physics, psychology, sociology as well as poetic and symbolic interpretations of inner experience. Whether it’s about form or content, they extract ideas from these concepts and embody them within three layers – stratums – which create the backbone of their pieces: audio, visuals and dance. Read also as: vibration, light, movement. For Φ, StratoFyzika reduced their performance to repetitive patterns in music, lightning and movement; they specifically focused on phasing of those patterns. Particularly, they mention this video by Steve Reich as an inspiration:

The result was very convincing with the lightning creating slight optical illusions, revealing the bodies and their shadows and being perfectly in sync with music and dance.

The whole performance started with slow stroboscopic change of light and darkness, which slowly became faster, shone from various angles and made the whole visual experience looking like going through a set of photographs. At the beginning, the dancers shared the line of the body and so embodied the visual representation of Φ in motion. Later, we could fully explore the choreography of Hen and Daria, which for both dancers seemed quite similar, schematic, even mechanical (also thanks to their punched-card-like costumes). Repetitive moves, sometimes symmetrical, sometimes passing by each other, were repeated again and again over time by one or both dancers. Sometimes, one would be just few moves away from the other, other times, they were perfectly synced. I believe such performance is difficult to train and perform with accuracy, especially since there wasn’t always a strong rhythmical pattern which would guide the dancers’ tempo and moves and the lights could feel disorienting not only to the audience, but also to the performers themselves. But they did a very precise job! 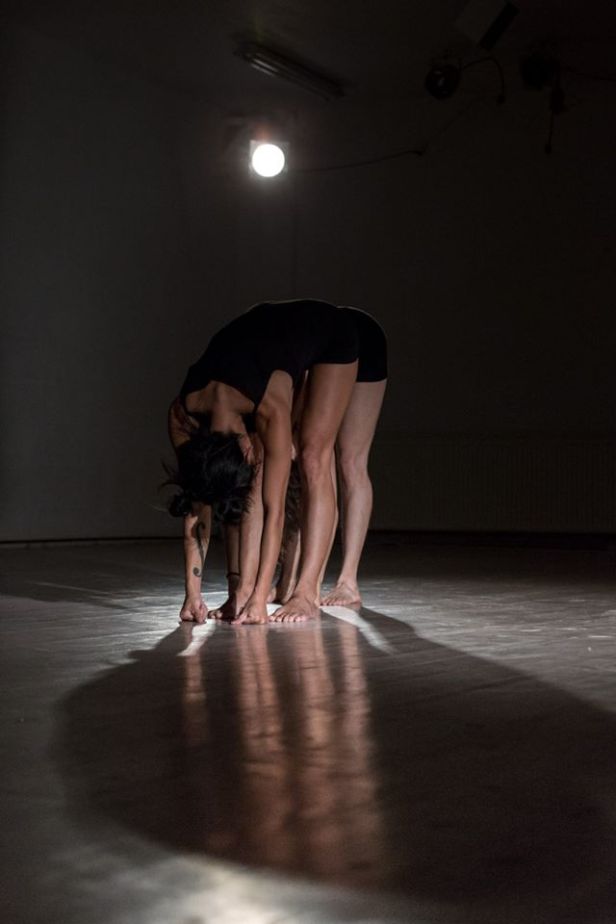 For the audio part, Akkamiau, the composer, explains: “Since we were considering phenomena of looping and phasing, I chose to explore transcendental number theory, because every real transcendental number must also be irrational and cannot be expressed exactly as a fraction.” First, Akkamiau recorded an improvised material using the notion of primal numbers and randomly distributed digits of the fractional part of number Φ on her Korg keyboard, and edited the algorithm settings of her karma arpeggiator “to values according to decimal expansion of imaginary part of first nontrivial zero of Riemann zeta function, to follow Riemann hypothesis of the distribution of prime numbers,” as the composer herself puts it. These recordings were later deconstructed, sampled, disintegrated in digital crumbles and shaped into a complex sound environment, surrounding the two dancers, storytelling their actions and movements with audio narration in quadratic sound.